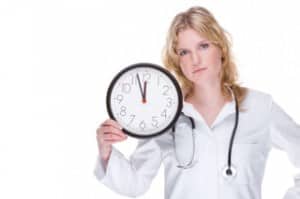 While thinking about a lawsuit probably isn’t at the top of anyone’s list of things they look forward to doing, it is something that, as a doctor, you want to have a certain amount of preparedness for.  One of the things that’s important to know is, from a legal standpoint, who can and can’t bring a claim against you and when?

One of the key legal tools for preventing doctors from being indefinitely liable to suit by every patient they ever see is the statute of limitations.  Most basically a statute of limitations is “a law which sets the maximum period which one can wait before filing a lawsuit, depending on the type of case or claim.”  The purpose of statutes of limitations, which go back at least as far as ancient Rome, are to prevent cases from being brought up long after memories have faded, records have been lost, evidence has been destroyed or tampered with, etc.  Statutes of limitations exist in many areas of the law, both civil and criminal, but they are particularly important in the area of medical malpractice.  In medicine, these statutes keep doctors from incurring an ever-greater degree of potential liability from the time they begin practicing, until the day they die.  A doctor can generally assume that after a certain period of time a patient is not going to be able to sue him for a procedure that he or she now says involved malpractice.  But how long is that period of time?

The discovery rule is a modification of the standard statute of limitations that can be invoked in instances where the claimant did not discover the alleged malpractice until sometime after the date of the procedure that allegedly caused injury.  Maybe the most often cited example, and one that is sometimes explicitly mentioned in state statutes of limitations, is a foreign object left in a patient’s body after a surgery.  The damage caused by such a mistake may not be known for some time, either by the patient or the doctor.  But there are other instances where a discovery rule might apply—any injury in which symptoms develop slowly and over time, for instance.

The key thing about the discovery rule however, is that it is based on when the claimant discovered the alleged malpractice, or when a reasonable person should have.  If a patient has ignored symptoms and evidence of a problem for several years and the standard statute of limitations has passed, they cannot then invoke the discovery rule—at least not with much hope of success.  That said, this is an area of the law where the court does has some subjective discretion.

In addition to discovery of the injury later than when it occurred there are a handful of other scenarios that can cause the standard statute of limitations to be tolled.  These vary from state to state, but the general logic behind them and principles of how they are applied tend to be relatively consistent .

For instance, most states have some kind of modification to the standard statute of limitations for minors or at least young children (though Connecticut is an exception).  The general idea behind most of these is that in the case of young people who are victims of alleged malpractice, they have either the period of time stated in the standard statute or until they obtain a certain specified age, whichever is greater.  Now the age ranges anywhere from six or eight to, in some cases, eighteen.  But again, most states have some kind of exception to the standard statute along these lines.  The details vary, but the general scope of the caveat is fairly standard.

In addition to an exception for minors, many states also include exceptions for claimants who were temporarily insane or otherwise mentally or physically incompetent to bring their case.  For instance, if part of the claim is that the alleged malpractice rendered the patient mentally unfit to bring his case for two or three years, it would be unjust for that fact to essentially force him to forfeit a right to seek redress.  So in such cases the statute of limitations is again tolled for the period of time in which the person was unable to pursue the case, and the statute (or in some cases a modified, shorter statute) begins to run after the person has regained competency.

Okay, enough with all this talk about exceptions.  At this point, if you are tempted to despair, don’t.  There is good news.  Although it may look like all the exceptions we’ve just gone through effectively defang any statute of limitations that could have given doctors some confidence that’s really not the case.

You see, in addition to statutes of limitations, nearly every state has a statue of repose.  A statute of repose is similar to a statute of limitations in that it provides a deadline before which a case must be filed but it is much firmer, and not subject to exception.

Furthermore, the statute of repose actually precludes the filing of a case, unlike a statute of limitations, which is an objection that must be invoked by the defense in their response to the filing of the complaint.  A statute of repose sets an absolute deadline after which a malpractice case simply cannot, under any circumstances, be filed irrespective of the merits of the case, age of the claimant, date of discovery, etc.  So it may be that a person is allowed two years from the date of injury to file under the standard statute, or one year from the date of discovery, but if there is a statute of repose of three years, they cannot file a complaint ten years after the event that allegedly caused the injury, regardless of when it was discovered.  The statute of repose has passed.  The court will not hear the case.

So what does this look like in practice?  Here’s a hypothetical, but not atypical set up for limits on bringing a medical malpractice claim.

As I said, that is just a made up example, but see how it starts out with a standard statute of limitations, followed by an application of the discovery rule, then some exceptions to the standard rule, and finally the whole thing is governed by a statute of repose?  That is how limits on medical malpractice cases are set up in many, if not most states.  Some states will not have all of these exceptions, others will have some additional ones, and in a few cases the discovery rule, statute of limitations, and/or statute of repose are combined in various ways, but the effect is largely the same.

Again, there is variation in these exceptions, but they tend to follow this broad outline.  For the specifics on your state just follow this link. With the background we’ve provided the details should sound familiar and make sense.

Hopefully this helps give you some piece of mind.  Sometimes gaining a better understanding of the things that cause us angst can be comforting in itself. We hope this article does that for you.  If nothing else it’s a reminder that there are at least some checks in the law that protect doctors.

General surgeons play an important role in health care, treating illnesses that can only be resolved END_OF_DOCUMENT_TOKEN_TO_BE_REPLACED

In today’s litigious world, there is no question that doctors and their medical practices need to END_OF_DOCUMENT_TOKEN_TO_BE_REPLACED

Most medical malpractice lawsuits fall into a few categories, and the most common causes of END_OF_DOCUMENT_TOKEN_TO_BE_REPLACED